skip to main | skip to sidebar

Inkblot: The Mark of Words

The following is an excerpt from the internal death row magazine, Lethal Injection, for which Leroy Mann is a co-founder and co-editor.
Writing can be a powerful tool when used in the construction of bridging the gaps between cultures that differ to the point where stereotypes dictate our interactions.  Writing is like a sales banner hanging from the tail of an advertisement plane.  Parked inside of a hanger, this banner is secluded from the public eye.  But when the plane takes flight the banner rides the winds of freedom for all to see the influential message it bares.

Writing has encouraged some of the greatest movements of our time.  It has also forecasted some of the darkest moments known to man.  Not even the stain of a death sentence can prohibit the moral duty of a scribe representing a community marked by the words of condemnation.

Here, in the U.S., exercising your first amendment right to free speech, and expression is not exclusive to any particular race, religion, gender or political placement.  Most recently, NBA ballers, Lebron James and Derrick Rose have expressed their support for the family of yet another victim of police brutality, Eric Garner.  They wore t-shirts baring the words, “I Can’t Breathe.”

Students attending prestigious universities are sprawled across the campus lawns and walkways emulating unjustifiable homicides by the hands of law enforcement agents.  Others carry signs of protest to combat the injustice surrounding the untimely demise of Michael Brown, in Ferguson.

Writing is a culture that continues to grow here on North Carolina’s death row.  George Wilkerson has become an engaging presence within.  As the editor of the long-running newsletter, “Compassion,” (http://compassionondeathrow.net/pubs/current.pdf ) and a revitalized drive for visual art, his expressions are becoming a mark of hope for death row prisoners throughout the United States.  Some might even say, George is giving us a reason to breathe.

Lethal Injection (L.I.): How long have you been on the row?

George Wilkerson (G,W.):  I received my death sentence on December 21, 2006.  Time perception is a funny thing: sometimes it feels like only yesterday; other times it seems as if my entire life is prison.  I am 33 years old, and I was 23 when I was arrested.

L.I.: Taking on the position as editor of a published newsletter must be pretty demanding.  Do you have any other projects on your creative table?

G.W.: It’s challenging in many ways, but not so demanding in terms of time and energy because I don’t have the luxury of consulting with contributors – hence the challenges.  I have to figure out what they’re saying and sometimes must make judgment calls about what to change/cut/add if necessary, and hope I got it right.

As to other creative projects, I’m always working on new visual expressions.  I just finished a book of poetry, which I sent out to be prepared for publication as an e-book.  I’m indecisive about whether to focus my energy on writing a devotional, a collection of topic essays, or a series of poems.  I’ve also been asked to write for a parish magazine in England, that has a distribution range of 7,000 readers/church members.

L.I.: You’ve obviously been pushing the pen, but what are your aspirations as a writer?

G.W.: I want what I do to be meaningful.  I would like to be as productive and helpful as possible, which is qualitative rather than quantitative, i.e., being prolific doesn’t necessarily mean I achieved that.  So, I’m very intent on what I write, over how much I write.  I can’t write for the sake of writing.  I don’t exactly have to see how a thing can help, only must believe that it can and hope it will.  It is the intent.  I aspire to stay true to that core.

L.I.: I have to say that I agree with your perspective on qualitative writings.  Just because you can pick up a pen, or punch a key doesn’t necessarily mean you have something profound to say.  In saying that, I strongly believe when a death row prisoner’s words transition into global sentences pertaining to humanity, he/she becomes an activist for the cause of humanity.  So tell me, how do you feel about the tension stirring across the country, concerning the Ferguson and NYC decisions to not indict police officers for their usage of excessive force?

G.W.: I watch very little t.v. and read very few newspapers.  Although I am familiar with the cases you refer to, I’m not familiar with all the details, but from what I can gather, it seems like there is something deeper going on and the incidents themselves were only the proverbial back-breaking straws.

L.I.: Oh, I wholeheartedly agree.  I don’t believe for one minute that Eric Garner was murdered because he was selling “looseys” without paying taxes.

G.W.: I’ve seen such things get exposure – as they should – only to fizzle out.  It disturbs me because the problems are pervasive, systemic even, so these places aren’t isolated incidents.  I don’t believe race relations are at the heart of the problem, but rather there seems to be an across – the – board dissatisfaction in our country.  E.g.: In here, I often see guys who are unhappy… and they seek out problems with others, latching onto the smallest “wrong” even after evidence shows it wasn’t how it at first seemed.  They just wanted an excuse…

G.W.: Well, an excuse to argue or fight, to vent their frustrations or whatever.  The world is ripe for revolutions, and it’s like our country is soaked in gasoline looking for a spark.

L.I.: Speaking of sparks; what can a death row prisoner/humanitarian activist do to assist the nonviolent demonstrations taking place on the campuses of Duke, Carolina and North Carolina Central?

G.W.: Off the top of my head, I don’t know.  I suppose it comes down to who we know or are connected to.  If there were an open communication link between a death row prisoner and someone connected to an organizer, then it’d be about resources and goals: what resources do they have in terms of influence/manpower, time, money, willingness, etc.  A clearly defined goal along with a thorough analysis of the resources is a prerequisite.  A death row prisoner could be a resource depending on his connections and intelligence.  And such a one has immeasurable potential.

L.I.: Our creative writing class has featured several lectures by Duke University professors.  Through theological history, Arabic studies, and political science we learned the magnitude of writing from captivity and civil disobedience.  I don’t think it is farfetched to believe that some of these campus protestors are students of these very same professors.  Six degrees of separation is not always coincidental.  The connection you speak of may merely be a lecture away.

G.W.: I try not to get caught up in things I can’t change, or aren’t the areas I believe I need to be working on.  I’m not saying the incidents aren’t important, I’m just saying I’ve got problems popping up at every turn.  I believe everyone has a role and position; I’m maintaining my position and playing my role – that’s all I can do.

L.I.: Fair enough, George.  Share some of your humble urban beginnings with our readers. 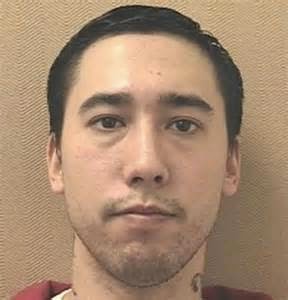 G.W.: My mother is Korean and my father is a white American.  He was in the army, got stationed in Korea and met my mother there.  I’m American born and raised – though from Korean heritage.  We were living in Germany when my youngest brother was born.  My parents were divorced while my dad was stationed at Fort Bragg, North Carolina.

The insulation in our trailer accidentally caught fire and a few minutes later, we were homeless in the snow, which is how we ended up in the projects.  I was six, with one older brother, and two younger.  I began to understand the concept of poverty.  The socio-economic lines were clearly defined – all the white kids were middle class and up.  Everything else was poor.  Kids can be cruel, and the differences in status also became associated with race superiority/inferiority.

The teachers were quick to discipline us, so we got into a lot of fights.  My family was only one of two that weren’t black, in my neighborhood.  We experienced years of racism against us, having to fight almost daily.  Eventually everyone saw us as just people.  Drugs and criminal activity were the norm.  Welfare checks were delivered to the big square communal mailboxes on the first of the month.

The whole neighborhood would be posted up around the mailboxes.  The mailman just stood there with a bundle of envelopes calling out apartment number after apartment number; similar to mail call in here.  There’s a saying in Latin: “Humani nil a mi alienum puto” – nothing human is alien to me.  We thought we were free, but we were only hammering out our chains, enslaving ourselves.

L.I.: Heavy.  I think this quote from First Lady, Michelle Obama is a suitable response to your words.  “The only thing that happens in an instant is destruction.  Build something… Earthquake; it’s gone, but everything else requires time.  Don’t let the struggle discourage you because it’s hard.  It’s supposed to be hard.” Keep making your mark, George.  Your role in all of this is much bigger than you realize.

Other Published Work By Leroy Mann